Spjärnsvallet releases AGAIN AND AGAIN! in concert on December 8

Country & Eastern is very happy to announce the release of the album AGAIN AND AGAIN with SPJÄRNSVALLET at a joint release concert with XYLOFONORKESTERN‘s STORA BLÅ on November 8 at Las Vega in Stockholm.

One of the first groups to dig deep into ethnic musics of the world, Spjärnsvallet was formed in the early seventies when Bengt Berger who had studied music in India (and was on his way to Ghana), met Christer Bothén who had learned in Mali (and was on his way to Morocco) for a long collaboration with Don Cherry beginning 1973 in New York where INNOCENCE is recorded. This was the starting point for the group with likeminded associates Nikke Ström and Kjell Westling. In 1975 we recorded the minor classic album Spjärnsvallet together. Some material that was not released then or was shortened to fit the LP format makes up the main part of this album plus a recording the three of us did just now: AGAIN – in remembrance of deceased multi instrument genius Kjell Westling, where we improvise around a couple of the tunes we used to play 40 years back . 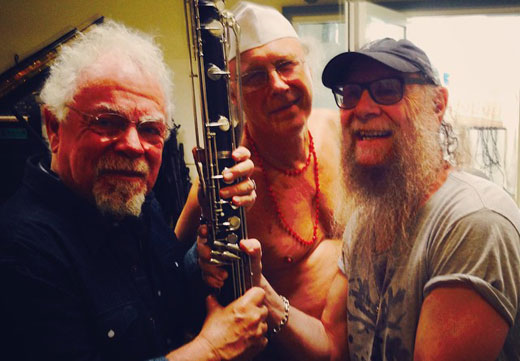 You will find a presskit att the Press/Info page