Why this Interest in Crickets and Chinese? (from the ce06 booklet)

Like many children I felt most at peace in nature, and from an early age I was especially facinated by insects. During my own private excursions in brush and meadow I came across many creeping, jumping and flying little fellows. I could spend whole summers trying to figure out who they were and what special habitats they preferred. I reared eggs and larvae I found and hatched and watched the development and metamorphosis of many a species from egg to imago. Later in life, when I roamed through Europe and North Africa in the sixties, trying to find the preferred habitat of my own organism, I often met with other travellers consulting the Chinese divination classic, the Yi Ching 易經 (Book of Changes) for a more secure passage. I was fascinated by the cryptic, archaic language, and intrigued by the problems of translating such an old text into a modern European language. As the Chinese script and Chinese culture had also long fascinated me, I now got to the point where I seriously started studying the Chinese language in Tangiers in 1969.

Later, in my early years as a librarian working with the Chinese collection of the Swedish Royal Library, cataloguing old books I came across a little blue book wrapper con- taining four small threadbound volumes called Sishengpu 四生譜, “Register of Four Lives”. It was a collection of four individual works, three of which described how to rear and keep live birds like the quail, thrush and siskin (yellow finch) – but the fourth work I could not make head or tail of, most likely because I was mistakenly looking for yet an- other bird.

The name used in the title was the poetic form of cricket, cuzhi 促織. This I learned only after consulting several dictionaries, and I was also given a reference from the Shijing 詩經, The Book of Odes, the oldest collection of poetry with texts dating from the Zhou Dynasty 周 (102–1 bc) to the Spring & Autumn Period 春秋 (0– bc). There it is said that in the beginning of fall, when the women hear the chirping of crickets as they are are drawn closer to the warmth of the village – getting closer and closer until finally they come all the way in under the beds – it signals the coming of autumn and reminds them to start weaving warm clothes for winter.

all records with Lars Fredriksson 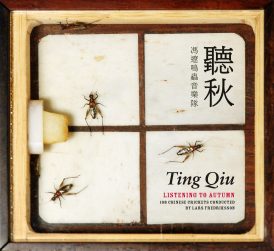 Lectures over the years

Concerts
• The jazz club Mondo in Stockholm
Lecture and concert, October 2005.
• The jazz club Mondo in Stockholm Midnight mass of the Cricket Rosary Orchestra, December 2005.
• Chinese New Year Cricket Concert in the Stockholm Concert Hall for the 2005 Year of Design.
• Kobra/SVT Footage from the concert broadcast on Swedish TV 2 (“Kobra”), with interview.
• The jazz club Bacchi Vapen, Stockholm Concert with lecture and improvisations with the jazz group Berger Knutsson Spering.
• ‘Lec-dem’ concert at the Department of Entomology in Bangalore
• Several ambient installations of both live and recorded crickets – among them a fashion show.
• Spontaneous concerts “wherever I walk as usually carry at least 5–10 crickets”.
• Ambient and sonic art exhibitions with picture shows.